A Stitch In Time! 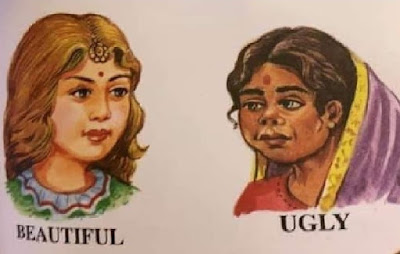 The image above is from a text book, and I came across this image on Facebook. The woman who is dark, seemingly from a rural region and clad in a sari - is ugly? What are we teaching the next generation? A darker skin tone, a heavy build or anything that does not fit the so-called beauty standards is ugly?

If we do not take a stitch in time, if we do not act now things will get worse. The next generation will lose itself in a hopeless cesspool of always trying to fit in.

A lot of people these days talk about body shaming and condemn it, but at the same time, we are guilty of silently judging people based on how they look. Sometimes it is not so silent - people loosely use terms like shorty, fatty, buddhi, kaali, and even aunty to define a person, and sometimes go on to use them as a form of abuse. Somehow, these physical attributes should make a person feel inferior.

How does a child who only understands a loving touch and a soothing voice start seeing the height, weight and skin color of a person?

The society (parents, teachers, relatives) unknowingly teach their children to look down on people with a dark complexion, and we pass this down to the next generation. So many people have said so much about the fair and lovely advertisements, but the product continues to sell like hotcakes. As if this discrimination was not evil enough for women, they had another product called fair and handsome promoted by none other than Shahrukh Khan himself. I like Shahrukh Khan for his wit and charm and all those affable Rajs and Rahuls he has portrayed on screen. But I did not know, that his success is attributed to fairness, the secret ingredient for confidence.

The television shows slim women as desirable and fat women as an object of ridicule. A talented actress like Vidya Balan was asked the most demented question "Are you going to stick to doing 'women-centric' roles? Or have you thought about losing weight?".  Take any show of Bharti Singh - the only well-known woman stand-up comedian in India, and you will know what I mean.  This discrimination does not bother us one bit - from the other side of the fence.

When I saw the comments section on the FB post I have mentioned, many people wanted to name and shame the writer/editor. But again, the writer of this book is taught to think like this. A woman who is dark, seemingly from a rural region and clad in a sari - is ugly! The dark-skinned, brazen women in villages work hard to make a living, the so-called weaker sex - is the hand that feeds. The wrinkles are a testimony of the hardships they have faced in life, and heroically overcome them to emerge as winners.

The God of cricket, Sachin Tendulkar stands tall at 5.5. Our ex-Prime Minister Lal Bahadur Shastri at 5.1 epitomized honesty and simplicity and had the heart of a lion. Shivaji Maharaj, a name that evokes emotion in every Maharashtrian’s heart was just 5.5, and a 7 feet tall Afzal Khan could not defeat him- even by deceit. But today we lack the basic sensibility to acknowledge a person for his/her nature, knowledge and goodness, all we manage to see and be impressed about is the appearance - all that is superficial and fluff.

I say ‘we’ because I am guilty of this crime. Forgetting all the flaws that I embody, I confidently go on to judge others, so I am not admonishing people for having this mindset, instead urging the society to stop this nonsense. After having more than a dozen biases stuffed into our conscious from childhood, it is not easy to start thinking differently, but let us make conscious efforts to know people beyond their appearance and not judge a book by its cover!

Posted by Preety Paranjape at 4:43 AM No comments:

Gardener Of My Life!! 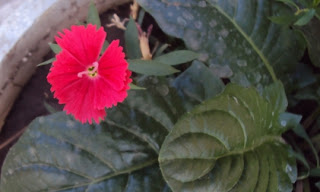 Small bud that blossoms into a fine flower
Lives in the realms of its own unabashed charm
It forgets the hands that watered the roots,
The love that nurtured and helped it to bloom
Thinks it is me, who beautifies the surrounds
And forgets the Gardner who nourished the grounds
© Preety Paranjape & D’zineDais
Posted by Preety Paranjape at 9:22 AM 2 comments:

Fake friendships, fake smiles
Fake relations, and the half hearted efforts to keep them alive,
In a milieu of such fake attempts
How can LOVE survive? 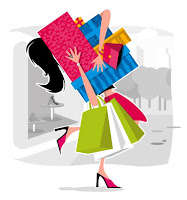 Tired and tested, I seek retreat.
But there are situations, I simply cannot beat.
Surviving with what is destined to be,
patiently waiting for the day I can break free,
and finally go on a Shopping Spree!!

A speck once wanted to touch the sky
But it had no wings, and knew not how to fly
It looked up with hope, and along came a butterfly
Stuck onto its wings, the speck began to fly
Soaring up high, it soon touched the sky.